In case you have neither the time nor the interest in reading about my take on Oktoberfest below, please enjoy these two videos put together by my friend, Trent!  His camera has a setting that takes a three second video everytime he takes a picture.  He utilized this awesome setting to put these together.  Enjoy! 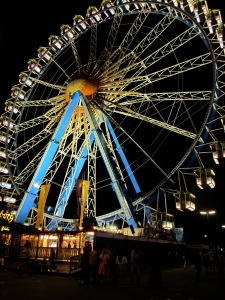 After the outrageousness of this past weekend, I hope you can all forgive me for just getting the time to sit down and write about it all.  You guessed it, we were in Munich, Germany for Oktoberfest!!

Despite the absurd number of one-liter, higher than normal alcohol-containing, delicious, German beers I drank this weekend, Oktoberfest was nothing less than a wonderful adventure.  Okay, to be perfectly honest I only had five and a half beers all weekend, but trust me… that was PLENTY.  Anyway, let’s take it from the beginning…

After hanging out with some friends from class until late into the night at el Templo, I slept for a few hours before meeting up to get to the airport by 6am for our 7:30am flight.  Then, Gabby and I spent our morning sleeping, eating croissants, and trying to pick out who in the airport was definitely on their way to Oktoberfest.  Upon arrival in Munich, we took the craziest metro I have ever seen to the camp site we would be staying in for the remainder of the weekend and quickly made our way to the festival, thus comensing the insanity of Oktoberfest with 15 of your closest friends.

Oktoberfest is full of tradition as it is technically a festival for the city of Munich.  Most Germans dress in a lederhosen (for men) or dirndl (for women).  I really wanted to buy one to wear during the festival and just to have, but we didn’t even have time to go into the city center, and the outfits aren’t really available for purchase at the festival itself.  Regardless, it was cool to see all of the different dresses, ranging from traditional floor-length fall colors to short neon ones.  They also serve traditional food in all of the beer tents.

I’m going to have to digress for a second…  For those of you not very knowledgeable in the happenings of Oktoberfest (as I was last week), there are many (sorry for being ambiguous… somewhere around ten) large beer tents.  These consist of the beer halls (indoors) and the beer gardens (outside).  To order a beer, you have to be sitting at a table.  To be sitting at a table, you pretty much have to be drinking a beer.

Back to the story, the food is absolutely delicious!!  Some of the things that we tried were:

There is also a huge carnival that is part of the festival, which was really cool to see. My favorite part of the entire weekend was riding the ferris wheel at night with Dan (twice!); it was so cool to see the entire festival of lights and people from so high above!  All in all, it was great to spend the weekend exploring a festival so foreign to us, yet so customary to so many other people.  We meet so many people from all over the world while we were there; it was great to share our stories with all different types of people!